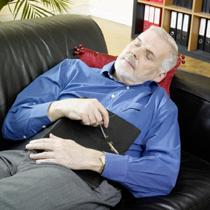 Sleepiness and Sleep Apnea are often linked. Sleep Apnea Syndromes most commonly cause sleepiness to occur. This may be described in different way such as being tired, feeling fatigue, having a lack of energy, or falling asleep during the day inappropriately. A feeling of being poorly rested after sleep is also common as is the need to take afternoon or daily naps. Because the sleep apnea events result in sleep interruptions all night long, the quality of sleep is affected more than the quantity in many affected people. In particular, deep sleep and rapid eye movement sleep (REM) is affected the most. These stages of sleep cause the greatest degree of daytime sleepiness.

Sleepiness during the day is a major problem for today’s society. It has led to an increase in motor vehicle accidents as people fall asleep while driving. Sleep apnea syndromes also result in a great deal of lost productivity at work. Attention, memory and focus are all affected when we are sleepy. And, it results in other health effects. The lack of energy with being sleepy all the time can lead to a less active lifestyle. This in turns results in weight gain which worsens the sleep apnea syndrome. This results in a vicious cycle. Sleepiness can also lead to poor relationships, depression, problems at work, and higher chances of atherosclerosis.

While sleepiness in sleep apnea conditions is present in most people with Sleep Apnea Syndrome, it is not universal. Some people have severe sleep apnea and never have complaints of sleepiness. Their ability to tolerate the sleep interruptions at least from an energy level is superior. But this does not mean they do not have ill health effects from the sleep apnea condition itself. If sleepiness is a symptom, then assessing one’s quality and quantity of sleep are the first steps. Sleep Apnea Syndrome represents a large category of these individuals.

Back to Sleep Apnea Symptoms