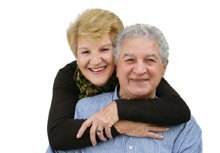 The human temporomandibular joint or TMJ is the joint between the temporal bone and the mandible which can be felt just in front of the ear. The TMJ is a unique from all other mammalian jaw joints and is a product of their evolution into full upright posture and connected to our ability for speech.

As humans evolved into our upright posture base of the spine with its foramen magnum and the cervical spine itself moved in to the six o’clock position under the center the cranium. This brought the throat and airway forward just under the jaw bone. At the same time both the upper and lower jaw bones became less prominent and instead of the large upper and lower jaw bones that we see in the profile of chimpanzees we developed a square human profile.

This brought the path of the jaws natural rotation on opening to come down into the throat. It became necessary and for the opening path of the jaw to move forward to so that the swing of the jaw did not obstruct the airway. In order to accomplish this the jaw had to free up the previously bound the ligamentous holdings of the jaw joint and allow the jaw out to glide forward bringing the entire jaw forward as the jaw opened to maintain a free breathing airway. This sliding movement of the jaw which we call translation is unique to humans.

These changes were great advance allowed humankind to develop incredible cognitive and physical characteristics that we have today. But this movement and other changes that a human jaw and throat developed in order to speak made the joint and throat system to have a very high complexity of function. In order to accomplish this the articular disc of the TMJ, the disc that sits between the condyle of the mandible and concavity in the temporal bone the mandibular condyle seats in called the Glenoid fossa , must slide along with the condyle in its transitory movement out of the fossa.

The articular disc is a very tough fibrous material that is like any round pillow compressed in the middle with the condyle pushing into that center from the bottom and the projecting eminence of the temporal bone pushing down from the top. In a healthy joint ligaments hold the articular disc tin place above the condyle as it moves forward keeping it located between the condyle and the temporal bone as the condyle slides forward out of its seat deep in the Glenoid fossa. This is a very complex movement and therefore is vulnerable to disorder. Compounding this complex movement with the fact that there are two joints that moved together and are operating under a great deal of force during chewing.

Herein lies the reason is that only humans have the two areas that my practice treats both the temporomandibular joint and airway problems seen in sleep apnea.